How to create an epic Voice Over in 5 minutes!


Have you been wondering how to create a voice over?

Do you feel that recording and adding a voiceover to a video is time-consuming, expensive, and a frustrating experience?

If so, do not worry! This article will help anyone understand how to create a voice over quickly.

Basically, there are three ways to create your own voice over.

Hiring a professional voice over artist is both expensive and time-consuming. So you wouldn’t want to use it unless you have deep pockets and much time in hand.

The second option – to create the voice over yourself is not great unless you have a voice like Morgan Freeman.

Finally, option 3 is considered merely a newbie move because the output is usually too robotic.

We have the perfect solution to help you create an epic human-like voice over in just 5 minutes. And the best part: It’s FREE!

Yes! You heard that right!

Let me introduce you to “Animaker Voice” – an online text-to-speech app that helps to convert any form of text into an audio file. It comes loaded with more than 200 unique voices in 50 different global languages.

The Animaker Voice app helps you create ultra-realistic studio-quality voice overs in a matter of minutes.

Simply create a free account with Animaker Voice and start creating voice overs in any language of your choice on the go!

There are also options to customize the voice according to your preferences. Like you can adjust the speed of pronunciation of the voice, introduce breaks between the words, add breathing effects, and even tune the pitch of the voice. With just the free account, you will get to create unlimited voice projects and five free voice downloads every month.

Sounds so good to be true, right? Well, here are some voice samples that were created using Animaker Voice:

The dove dove into the bushes.

Hi there! Do you speak english?

Hello there! My name is Matthew. What’s yours?

Creating a voice over using Animaker Voice is as simple as baking pizza.

Step 1: Decide on the Base

If the base of a pizza is not upto mark, it doesn’t matter what kind of toppings you have – it will still suck! When it comes to voice overs, the voice and the script is the base.

Start with an awesome script

Writing a great script is not an art you’re born with, it’s a craft you can easily learn. All you need to know is a few hacks to help you get going.

But the million dollar question is, where would you get to learn these hacks? Check out this kickass blog to know how to write an excellent script under 60 minutes!

After you create an awesome script, it’s time to bring it to life.

We have kept all these things in mind while creating Animaker voice for you!

To add life to your script, you can use up to 200+ voices in 40 different languages. You also have the option to select the gender for your voice over.

That means you have a huge collection of voices in your arsenal to astonish any type of audience!

The offerings of most of the voice-over apps stops here. But we are taking it a notch up.

Excited to know more? Well, we are just warming up! 😉

Even if you have a pizzalicious base, if your toppings suck, that’s a pizza no one will eat. In Voice Overs, emotion is the yummy topping. It is the most crucial part of creating a good voice over.

Hmm! But how does emotion make a voice over good?

Well, how would you feel if I talked the same way when I am happy and when I am sad.

Won’t that be too weird, boring and monotonous?

Well, this is what all TTS apps do to your script. They can even kill a super awesome script by making it bland and tasteless.

Animaker Voice, however, provides you with the tools to really spice things up!

The main problem with regular TTS apps are that they just robotically read out every word that is part of the script. But, pauses in between the words are as important as the voice itself.

Imagine a person speaking continuously without taking a pause between two statements.

Well! It would sound boring as that is not how we humans speak.

With Animaker voice, you can add a pause using “Break” feature. You can even increase or decrease the pause time between two words. 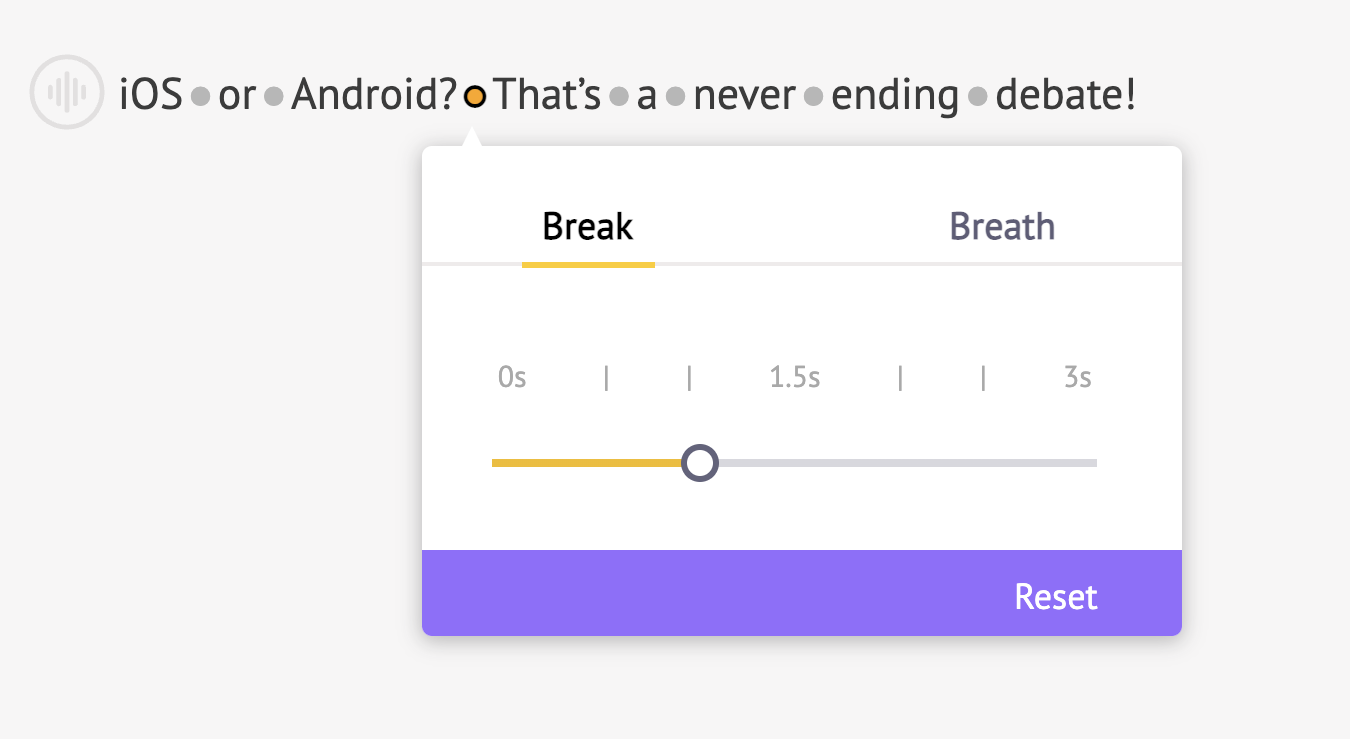 Just like pauses, breathing is also an important part of a Voice over.

A person who is not breathing is either not human, or is already dead! Plus when you think about different scenarios that we face on a daily basis, you would understand how important breathing is to help convey a certain feeling.

Imagine a person who is trying to speak after coming back from a run. How would he sound? He would be panting while speaking. Right?

With Animaker Voice you can add these natural breathing effects to your voice over.

Hi Michelle! I’m on the treadmill. I’ll call you back soon

The pitch of a voice helps the most when it comes to conveying emotions exclusively through the voice. For instance, If your narrative has a scene with a ghost appearing suddenly in front of the male protagonist, what will he do? Unless the character is Voldemort himself, he will scream like anything!

At times you need voice overs at the right pitch and tone to convey emotions that are part of a scene.

We knew that you would want to go crazy with your narrative sometimes. That’s why we have added the pitch and volume feature on Animaker Voice.

With this, you can increase the pitch and volume with levels ranging from low to high.

Remember John Moschitta Jr? The world’s fastest talking man who did a lot of funny commercials for FedEx and JetBlue Airway?

Check out the ad he did for JetBlue Airways.

Want to do a voiceover like John Moschita Jr? Here is some good news for you!

With Animaker Voice’s “Speed” feature you can change the speed of the voice from Slow to Fast.

Now we have a good script and a great voice over. But some of you might need a little extra something – like whisper sounds or censoring options.

Don’t tell anybody. It’s a secret! 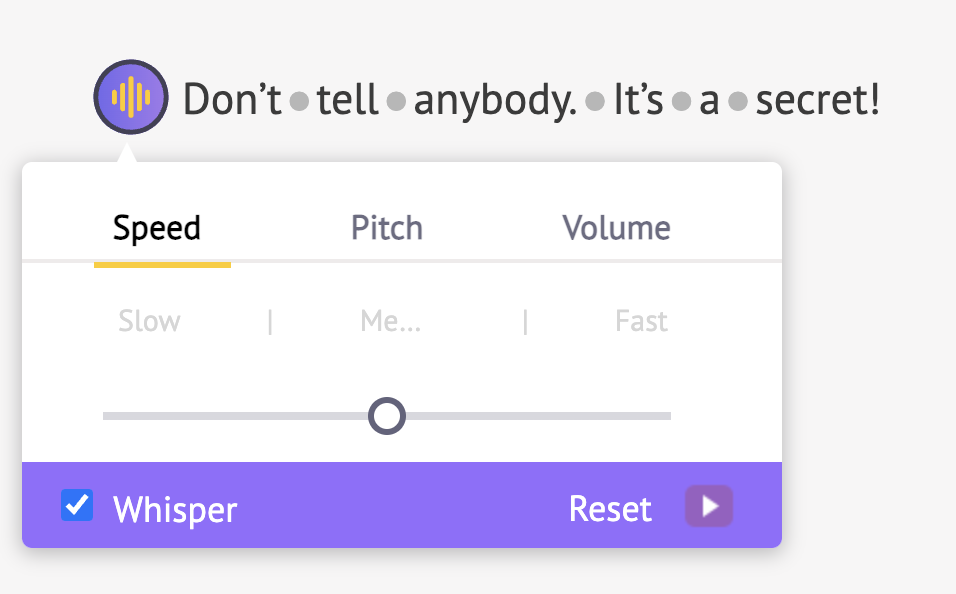 Say it without saying it!

There can be cases where you are quoting someone in your video and they happen to be using offensive words.

Now, you don’t want your video to contain profane language! This can even lead to your video getting demonetized in Youtube!

To save you all that money, we have the censor feature for you!

With this feature, you can mute the words which you don’t want to be heard. A beep sound will come instead of that word!

As I said, you could say it without saying it.

Step 3: Bake it and take it

With such good base, great toppings and incredibly delicious cheese, it’s time to bake our delicious pizza.

But before you go for the final step, review your voice over for any changes. After you are done, click the download button and have a taste of what you have created.

There are also lots of features for you to explore in Animaker Voice. So, why wait? Start baking now! How to Make Money with Various Money Streams (2023)