News Roundup: The Future of Facebook, Pinterest’s Latest Changes, the Most Popular Stories, and More As ever, a ton is happening in the world of social media, and it can be hard to catch every story.

So we want to highlight some of the biggest news items from recent weeks that might impact your social media marketing.

We’ll touch on Facebook’s most recent product changes and strategic plans, how Pinterest continues making splashes with its business and shopping features, and the latest data on social media trends and usage. Learn what’s coming next to Instagram and find out what’s more popular: Facebook Stories, Instagram Stories, or Snapchat.

The Future of Facebook (new audio from Mark Zuckerberg)

The Verge — a technology and culture news website — released two hours of leaked audio of Mark Zuckerberg talking to his Facebook employees, answering questions about Facebook’s future, the risks it faces, and the strategies for things like privacy, reliability, and even Libra, Facebook’s new cryptocurrency.

The audio was a very sincere Zuckerberg talking openly and genuinely with his team. It was a side of him you don’t alway see in public forums.

What we found particularly interesting — and relevant to social media marketers — was his thoughts on Facebook strategy.

At one point he started talking about Facebook’s response to a threat like TikTok, which has exploded in popularity recently. If you’ve yet to try it, TikTok is a social media app for sharing videos; it’s become especially popular with younger demographics.

Zuckerberg related TikTok to the Explore tab on Instagram, saying:

It’s almost like the Explore Tab that we have on Instagram,  which is today primarily about feed posts and highlighting different feed posts. I kind of think about TikTok as if it were Explore for stories, and that were the whole app.

It appears that Instagram is best positioned to compete with TikTok, and Zuckerberg mentioned that they’ll be making some changes to Instagram, including changes to the Explore tab so it’s more focused on Stories.

That’s a good takeaway for marketers. We already know that Stories are an incredibly popular way to reach your audience — you can check out last week’s episode on Stories examples and ways to schedule Stories with Buffer.

And one other tidbit worth keeping an eye on: Zuckerberg mentioned that Facebook has built a TikTok-like app and is currently testing it in countries like Mexico, where TikTok has yet to be released. The app is called Lasso — Facebook is trying to find product-market fit with the app before bringing it to other countries to compete directly with TikTok.

(Not long after the audio came out, Facebook responded by livestreaming an internal Q&A session at Facebook.)

You’ve heard about likes going away on Instagram — perhaps you’ve even experienced it already.

Facebook is officially starting to hid like counts on its posts, starting first in Australia. Just like with the removal of likes on Instagram, with Facebook likes, the posts’s author can still see the count, but it’s hidden from everyone else who sees it. People can see who liked it but not how many people liked it. Same goes for the Love, Haha, Wow, Sad, and Angry reactions.

There’s been a lot of positive press about these changes for Instagram and Facebook, especially as it related to people’s well-being and experience on social media. There’s less social pressure for a post to perform to a certain threshold — less envy, less competition.

And to be clear, these hidden like counts are still being treated as tests. A Facebook spokesperson told Techcrunch, “quote”“We are running a limited test where like, reaction, and video view counts are made private across Facebook. We will gather feedback to understand whether this change will improve people’s experiences.” unquote.

The thinking is that if the test improves people’s well-being without affecting engagement or activity with Facebook, then it’s likely to keep rolling out to more and more countries.

We wrote on the Buffer blog about this shift away from like counts and what it might mean for marketers.

Our take is that it signals a move toward attention metrics, which marketers have already been tracking and optimizing for some time now. In fact, I’d venture to say that marketers were ahead of the curve on this shift away from likes.

These give you a great signal of whether or not your content is working and keeping people engaged. It’s much clearer data than an ambiguous response of a like.

All year long, Pinterest has been releasing a ton of great value to businesses and advertisers through new features on the app. The company went public earlier this year and continues to grow, most recently surpassing 300 million monthly active users.

What caught our eye with Pinterest’s most recent moves was its addition of more business features and e-commerce features with catalogues, profiles, and shopping.

Let’s start with the catalogs.

As of a couple weeks ago, if you’re an e-commerce company, you can upload your full catalog to Pinterest and automatically turn all your products into shoppable product pins. This feature was first rolled out to select partners in European countries and is likely to expand further as shopping season nears.

The interesting signal that this news tells me is just how committed Pinterest is to creating an awesome shopping experience on the app.

You’re right. We’ve seen similar with Instagram Checkout, which lets you buy directly in the app. It feels like both Pinterest and Instagram are moving in the same e-commerce direction. If your brand sells to consumers online, then these two social networks will be key places for you.

In addition to catalogs, Pinterest also debuted new dynamic business profiles with video cover images and a dedicated Shop tab. We’ll share a couple examples of these new profiles in our show notes at buffer.com/podcast so you can check them out. I think they look fabulous.

The new Shop tab is one of my favorite new parts of the profile. It’ll appear just under the main cover image and description, next to the options for Activity and Community.On the Shop tab, you’ll see a list of “Shop the Look” pins for your brand, even sorted into collections. The Ulta Beauty account is a great example — they have collections for things like Nail Polish, Eye Makeup, and Accessories.

This news comes from our friends at HubSpot who recently shared some interesting findings on the popularity of Stories.

Their survey showed that 70 percent of people prefer to watch Facebook Stories over Instagram Stories or Snapchat. 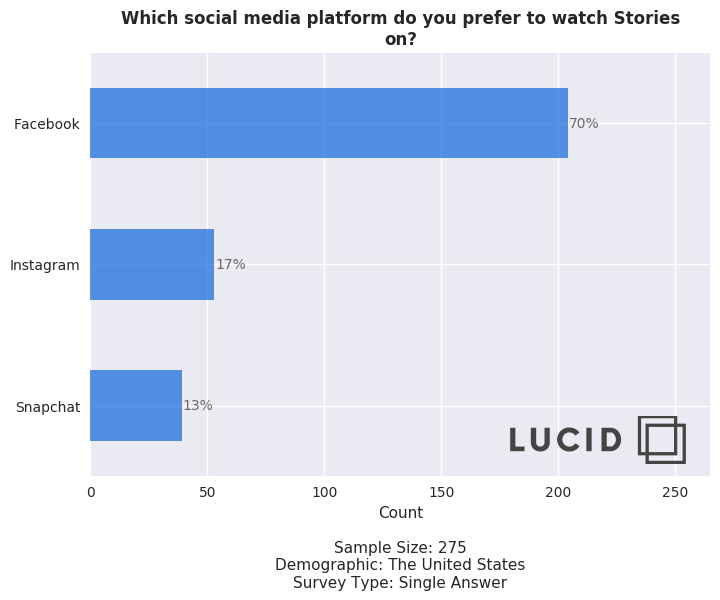 Now, before you go out and change your whole social media strategy, let me share a bit more context. The data had a small sample size — 275 people — and the demographics were a broad set of consumers in the United States alone.

So had the survey been larger or more focused on a segment like 18-24 year-olds or even 25-34-year olds, we might have seen different results.

From my point of view, this data made me think twice about Facebook Stories as a viable channel.

It’s definitely hard to ignore the reach and size of Facebook in general, so it makes sense that its Stories might be visible to an equally large number of people. And especially if Facebook Stories are talked about less than, say, Instagram Stories or Snapchat, it feels like competition might be a bit less, too, and you’ll have more chance to stand out.

Right, and the HubSpot article even goes on to describe some easy ways to test the water on Facebook Stories. A lot of companies take the lean approach: They simply cross-post the same content from instagram Stories to Facebook Stories.

Doesn’t get much simpler than that!

You can toggle on the dark mode in the Pinterest app. I know a lot of people love this for the way it saves their eyes. Even more good news, there’s a dark mode for Gmail now, too.

You can now use Twitter lists as alternate Twitter home feed timelines. You can pin up to five lists to your main screen then swipe back and forth to see them.

We’re huge fans of Twitter lists here at Buffer, so this feature has been a real hit.

Threads is a new camera-first messaging app to connect you with your friends. People are calling it another way that Instagram has taken inspiration from some of the features that Snapchat has built successfully. We’re eager to see how it performs for Instagram.

Also, Instagram recently changed its app so that you can non longer see“Following Activity” tab where it would show you the activity — likes, comments, etcetera — of the people you followed. SiteGround vs WPEngine vs Liquid Web How to Make the Right Choice