Consider that billions of people around the world have seen Star Wars. Millions of kids pretend to be Luke Skywalker in their backyards. They don’t practice tabulating spreadsheets or selling stocks—they fight lightsaber battles, imagining themselves as the hero.

Imagine, then, the power of making your prospects the hero in your outbound sales videos. It’s especially effective in business because buildings don’t write checks, people do. Even general counsels have a sense of humor and want to see things that are interesting, and stories are the most time-tested attention-grabbing tactic.

Your Call to (Video) Adventure

Basic storytelling formats haven’t changed in millennia and, by following them, you’ll give your video structure. The outlines of dramatic structure from the Greek philosopher Aristotle still ring true, and are recognizable from Hollywood tropes to the novels you likely read in high school English. They’re easy to apply, and following them can lead to big payoffs from your video sales pitches.

Tell a story, engage a client.

Let’s look at two storytelling structures: Freytag’s Pyramid, and The Hero’s Journey. Anyone who’s watched any DC or Die Hard movies will recognize these structures, even if you didn’t have a name for them. And if these storytelling frameworks net trillions of box office earnings, it stands to reason they might boost sales for you.

In fact, once you start breaking down the parts of stories, you’ll realize you’ve probably been following some of the concepts all along. But if you can streamline your story, and make it even more relevant to your prospect—the hero—your videos can become that much more engaging.

Say you’re selling widgets. You know your widget is 39% lighter than the competition, works 53% faster, costs 13% less, and has 29% more support.

Your client is asleep by now.

But maybe, three years ago you had a friend who struggled with their widget, who complained about the cost, the size, and how frustrated they were because a widget part broke, and they couldn’t get any support to fix it. So you decided to do something about that. And you designed this better, cheaper widget, and have around-the-clock o-call support, and your friend’s company has now doubled their production capacity.

This story fits the structure of Freytag’s Storytelling Pyramid. 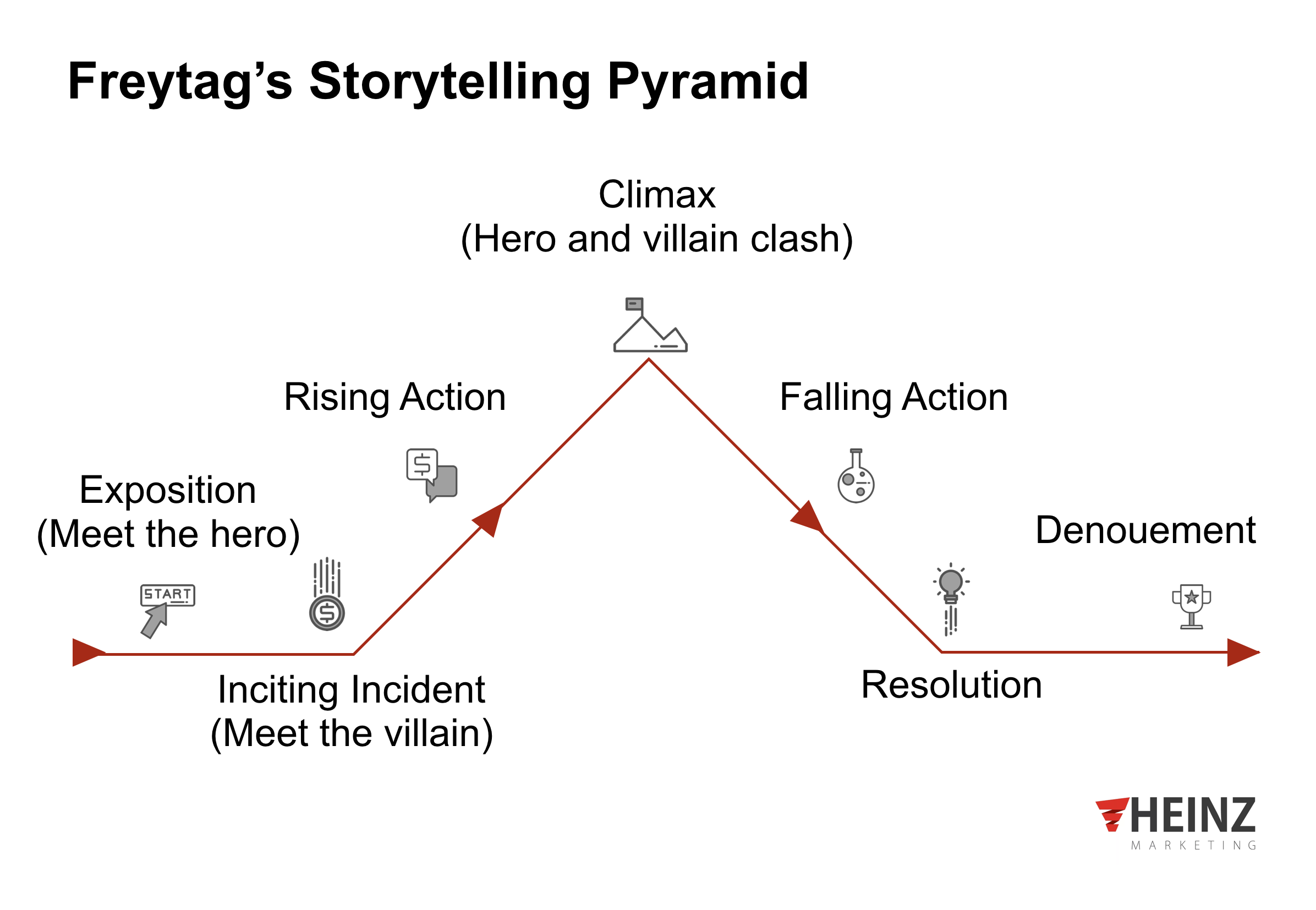 Do you remember any of those initial stats cited at the start of this section? Probably not. But I bet you remember the story—the problem and the solution.

That’s the power of storytelling in sales. Now let’s look at the Hero’s Journey.

Your Customer is the Hero

As Julianne Sweat of Outreach.io puts it, “Every good sales story nowadays should cast the customer in the hero role. Customers don’t want to be ‘sold’—they want to participate in how the plot unfolds. Focusing on features and benefits is tired and outdated. It’s the customer’s narrative and triumph over adversity that saves the day.”

They want to be Luke Skywalker beating the Dark Side. They want to be John McClane or Wonder Woman, leaping into a fray, being smart, brave, or crafty, and emerging victorious.

The writer Joseph Campbell famously outlined this archetype in his many books examining human nature, culture, and storytelling. He connects the dots from Homer’s Iliad in ancient Greece to almost everything George Lucas has ever touched. (His book, The Power of Myth, is worth a read; the PBS documentary he did in the ‘80s is also worth a watch.)

In short, the hero’s journey is a circle. The hero is called to adventure (broken widgets put their business at risk), they battle the villain (that awful widget-maker), receive supernatural outside help (you!), and return to where they started—changed forever. 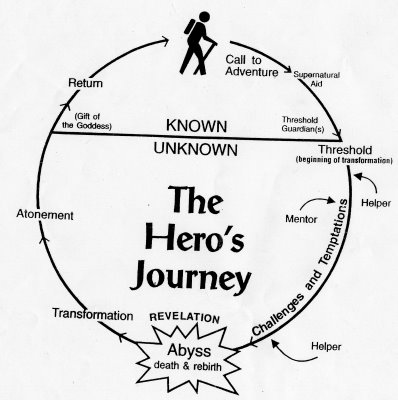 Image via the Gunn Center for the Study of Science Fiction.

Focusing a narrative around a hero—especially with your sales target as the hero in your highly personalized videos—is so ingrained in us that it elicits unconscious agreement. We like it—and here’s the key: This most ancient of all techniques makes us more likely to respond to whoever’s telling it.

To sell better through video, consider:

The good news is narratives don’t have to be movie-length to work. If you’ve done the research about your client and mapped out your narrative, you can create an engaging hero’s journey based on the common Freytag or Hero’s Journey model in under a minute.

And if that minute sticks in your target’s mind like the plot of Star Wars, you’re talking about a heroic boost to responses, conversions, and sales.

The post Pack 1,000 Years of Storytelling Punch into Your Next Sales Video appeared first on Vidyard. How to Add a Video Email Signature Vimeo vs. YouTube for business—and what you should consider instead